Natural hazard events cause huge economic damage and social disruption in our society. Impacts not just result from the frequency and magnitude of natural hazard events and an increasing exposure of buildings or infrastructure, but also from the vulnerability and resilience of residents and businesses. However, current natural hazard management practice commonly overlooks who actually lives and conducts commerce in the areas at risk. The prevalent spatial-economic, technocratic approach plans built protection based on the number of buildings and infrastructure exposed to natural hazards. The debate on social justice in climate change adaptation mainly focuses on stereotypical groups, such as migrants, the less affluent or the elderly.

However, assessing the vulnerability of residents does not just boil down to simple socio-demographic numbers. Affected households are widely diverse in how strongly they are threatened by climate hazards and which resources they might be able to mobilise. Whether a household is at risk not only depends on its economic affluence, but also on the physical characteristics of the residence, on the social capital this household commands as well as on the question of how well it is heard in the political process. For example, the Vietnamese population in New Orleans weathered Hurricane Katrina in 2005 fairly well despite being highly vulnerable in terms of poverty and housing conditions, as their close-knit social network enabled them to cope with Katrina’s impacts. A comprehensive assessment of private adaptation has to balance all individual resources, and has to acknowledge that assets in one domain can compensate shortcomings in another domain. JustFair expands the current narrow perspective on vulnerability by analysing this very interplay between various resources. 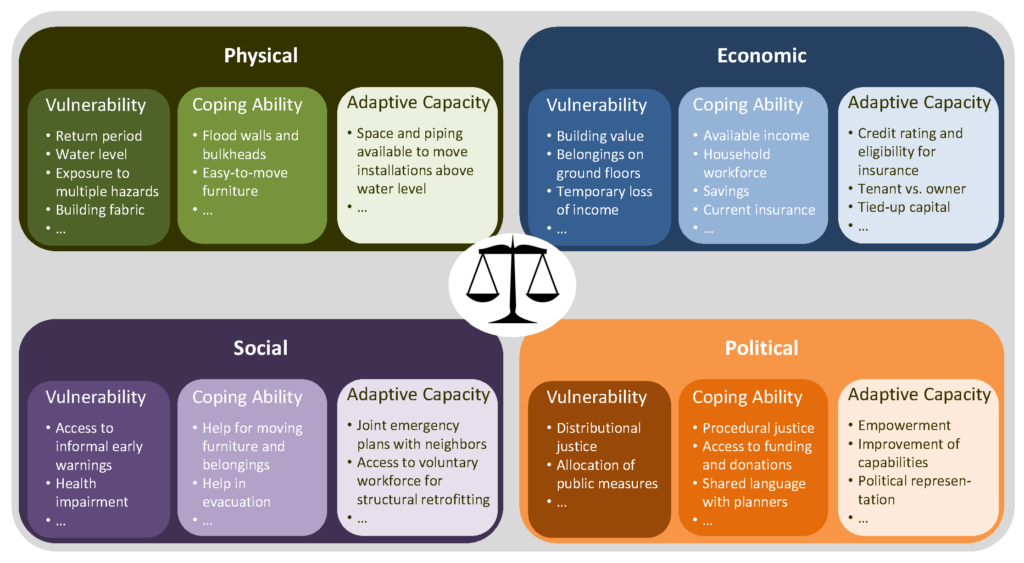 Areas hit by natural disasters are not monolithic wholes but rather mosaics of unequal communities. Hazard-related vulnerability, resources and capacities arising from individual livelihoods are not equally distributed among all members of society, but follow the borders of social stratification. JustFair’s premise is that current flood governance in Austria is at risk of reproducing existing inequalities – such as the welfare gap between high- and low-income households, or the urban-rural divide when facing population decline and demographic ageing.

Issues of social justice and climate resilience not just concern private citizens, but also extend to the business sector. Companies increasingly need to integrate stress caused by climate change into their risk management. Particularly micro companies may be driven to insolvency if a natural disaster coincides with other entrepreneurial crises. Yet, awareness and preparedness towards adapting to increasing natural hazards currently have a low priority on the business agenda.

Building on this rationale, JustFair aims to close the following research gaps: